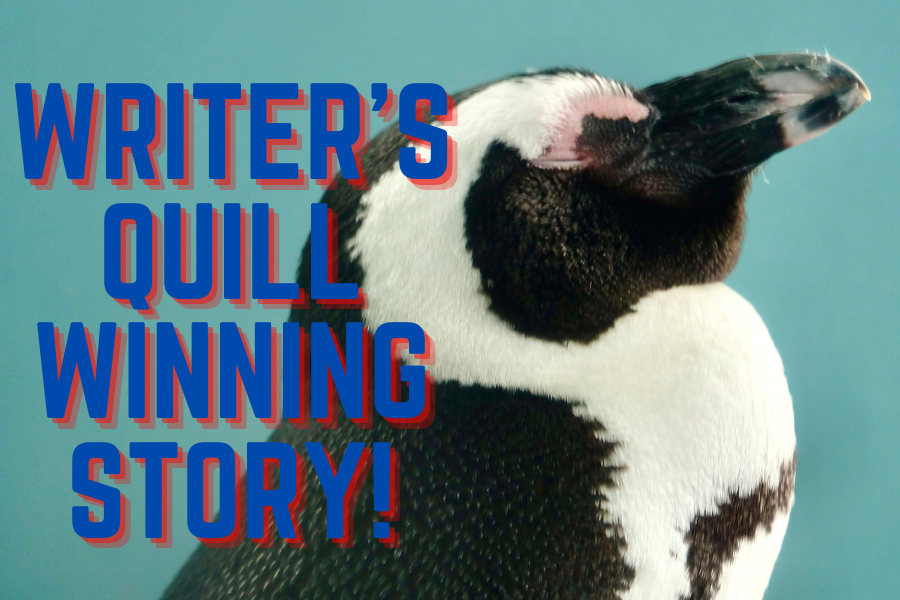 Welcome back to the Writer’s Quill! I am happy to announce that we have a winning story, “The Penguin and the Peddler”! Please join me in congratulating Daniel Gorell for his story, and stay tuned for the next prompt!

The Penguin and the Peddler
Daniel Gorrell (12th Grade)

The winter sun smiled down upon a snow covered forest. Within this forest ran a trail upon which walked a man clad in bright, red garments. This man, striding along briskly, carried a large sack upon his back.

Now the trees of this forest were more alive than most. They observed this peculiar man as he strode between them. In a noise that sounded like a winter wind, they spread the word among themselves regarding this traveler. Speculation ensued. Why was he dressed in red; where was he going; what was in the big sack. Some of the younger trees’ curiosity became so great that they tried to pull the man over and ask him. But the elder trees halted these ideas, saying,

“Do not reveal yourselves! If you do, you’ll bring the woodmen down upon us all.”

When the man had traveled halfway through the forest, however, a new object suddenly captivated the interest of the trees. Some distance behind the man was waddling a strange bird. It had smooth, black feathers on its back and wings with a white feathers on its belly. It was roughly three feet in height.

Many of the trees stood in wonder and fascination at this creature. None of them had ever seen a bird like this one. The eldest of the trees began debating about what species of bird it was. Some said it was a giant duck. Others said it was a monstrosity produced by the infernal smog-filled cities. Soon the debate grew hot and they began to shake their leaves at each other. Before hostilities could ensue, however, a young tree came forward and said,

“I know what kind of bird it is. It’s a penguin! They usually live in the cold south lands on the other side of the world. As to how it got up here, however, I’ve no guess. But it’s a penguin sure enough.”

The elder trees all scoffed and said,

“Don’t be a fool Firlong. There are no cold lands far South. Only burning deserts if the birds are to be believed. And besides, even if it did come from the South how did it get all the way up here.”

“That’s the difficult part. I am certain it is a penguin because I saw a picture of one from a human book while I lay as a pine cone outside the town library. I have no idea how it got up here, but one thing is for sure; it seems to be following the man.”

Suddenly the trees all turned their attention back to the man and saw with surprise that the penguin was silently waddling within two feet of the man.

Unable to control herself, a short fir tree named Nedla, leaned out toward the man and said,

“Excuse me, sir. I just wanted to tell you that there’s been a penguin following you for the past half hour.”

The man, twirled about, searching for the source of the voice, but instead caught the gaze of the silent penguin standing at his feet.