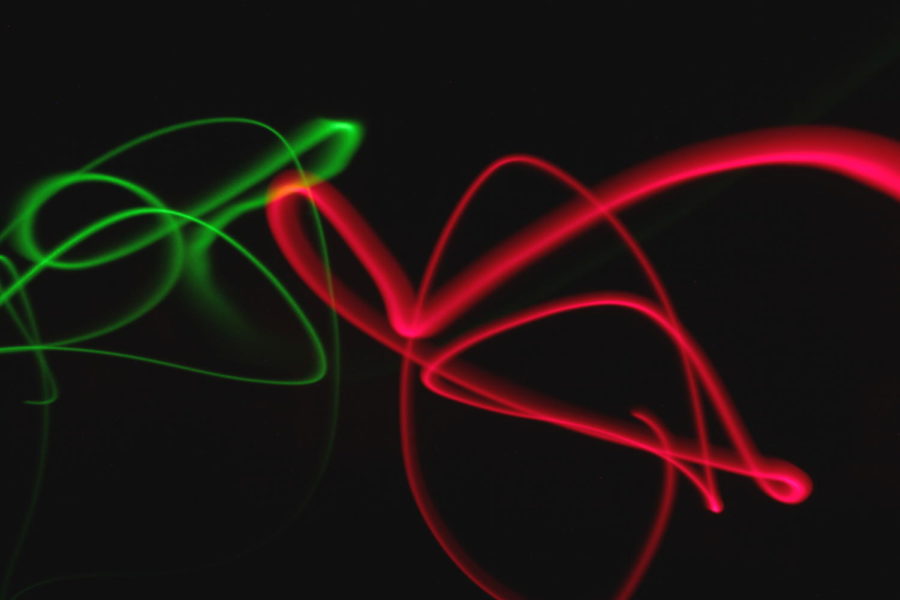 Gallery|4 Photos
James McCann
Pointing the lasers past the camera will produce thin lines while using a finger to catch the light will make brighter and wider lines.

More than a way to capture memories, a camera can be used to make some really cool special effects. One of these is light painting.

First, you will need a camera that has a manually adjustable shutter speed. A tripod is also essential because it would be difficult to hold the camera still for the duration needed.

The camera takes in whatever light hits the lens as long as the shutter is open and brings it all together in the finished photo.

In light painting, the photographer adds light to cause any number of effects. Here are some simpler effects that can be accomplished by anyone.

First, the simplest is taking pictures of the lights as they are. There are many different effects possible, however, without any planning and simply waving lights around, the light painting will most likely be an abstract of lasers.

Here’s how to get this effect. First, go to a dark room with the camera on a tripod and a laser pointer or a flashlight. Set the shutter speed for 6 seconds. The ISO should be reasonably low. In this picture it was set for 400.

The aperture was at the lowest setting- an F-stop of 22.

Turn on the laser pointer or if you are using a flashlight cover the top with your thumb and press the shutter release button.

Wave the light around in random swirls. When the shutter closes, take a look at the picture. It should look something like this.

The next logical step is to add a subject to the lasers.

The camera settings should be the same for this as they were for simply capturing lasers, but you will also need the flashlight this time. Have the subject be in a dark room or area.

Press the shutter release button, flash the flashlight on the subject. Then take the laser or flashlight with thumb over it, stand behind the subject and shine the light behind them, waving slightly. The end result will tie them together and it will look like the person can use the force!

Another fun effect with slow shutter speeds is to add transparency to a subject. A tripod is even more critical here. To do this, set the camera so that it takes a well exposed photo over a few seconds.

The ISO must be really low, here it was 100. The F-stop was at 9, and the shutter speed was set for 2 seconds.

Then, simply move whatever needs to look transparent halfway through the exposure time out of the frame.

Of course, one of the best things to capture in this way is people, as it makes them appear as ghosts in the end picture.