Recap of the Recent California Fires 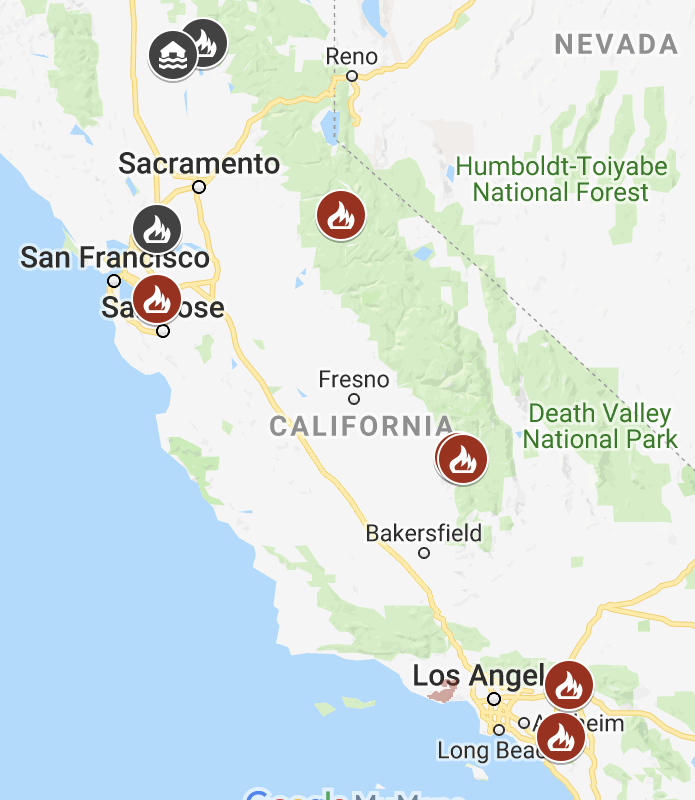 California just faced it deadliest and most destructive fire in the state’s recorded history: the Camp Fire. It was almost exactly a year ago that the Thomas fire left many in Southern California devastated. Now, the Camp Fire is just one of the three fires that has scorched California this November.

The death toll in this tragic fire is still growing. As of December, 85 people have lost their lives from this fire. The count of those missing was recently lowered from over 1,000 people to 6.

Camp Fire has burned 153,336 acres but is currently 100 percent contained. According to Cal Fire, the number of structures, homes and other buildings that were lost to Camp Fire number 18,793.

Only 500 miles south of Camp Fire, wildfire Woolsey burned through the counties of Los Angeles and Ventura.

In the Woolsey Fire, Cal Fire reports that lost lives amount to three and burned structures to 1,500 with more damaged.

Woolsey’s flames have passed through and burned 96,949 acres.

Woolsey devoured the homes of famous actors Liam Hemsworth and Gerard Butler, and those of many other citizens of Southern California. Many of them have reacted on social media and have sent their love out to all those who have been affected by the fires.

Ventura County not only had the Woolsey Fire to be concerned about but also the Hill Fire. Although small compared to the latter two, Hill Fire burned down 4,531 acres. It did burn four structures and damage two more.

What is the political world doing about these wildfires? President Donald Trump signed a disaster declaration for the state of California. The President also flew out to California and saw the devastating sights.

Has this affected MODG Students?

Below, Elayne Piquette, a MODG Senior, relates her experience evacuating from the Hill Fire.

Elayne: I was mentally preparing for an evening full of homework (the life of a MoDG Senior!), when my mom came home from an appointment with news.

She had seen clouds of smoke as she drove home, pretty near our house. Telling us it would be good practice for if we ever had to evacuate, and also just as a precaution, Mom had my 6 younger siblings and me put a few pairs of clothes and some essentials in a duffel bag.

The idea of ever having to evacuate was distant and rather ridiculous to me, but I humored her, and then sat down to do school.

A few minutes later, though, I could hear my younger brothers yelling from upstairs that they could see flames out the window. Sure enough, the mountain across from our neighborhood was producing huge billows of black smoke, and we could see a line of red fire peaking over it.

Then, what started as a drill turned serious. We started loading the two cars with essentials ranging from sleeping bags to important documents. Each of my siblings grabbed a few things they really cared about, and then we left.

Since my dad was on the other side of the country for a business trip, I drove one van and my mom drove the other. They had shut down the freeway because of the fire, so we took surface streets out of the town.

I have never seen so much traffic in my life. What was usually a 5 minute drive took over an hour. My siblings and I prayed the rosary and sang, then listened to a tape of Fulton Sheen.

After a quick stop in a Church parking lot to regroup and make phone calls (and say a quick prayer!), we drove to the house of a wonderful homeschooling family a few towns over, who had offered to let us stay there.

It was dark out by then, and as we drove away we could see the red glow behind us, and the flames still on our mountain. But being with the other family that night was a great distraction for all of us, though we knew that if the wind changed our house would be one of the first to burn.

The next day we eventually got news that our house was safe, so we went back. It was a scary 24 hours, but it gave a new meaning to the verse (Matthew 25:13): ‘Keep watch, because you do not know the day or the hour.’

If you have any questions or concerns about the California fires please go to Submit Your Idea here on MODG News.