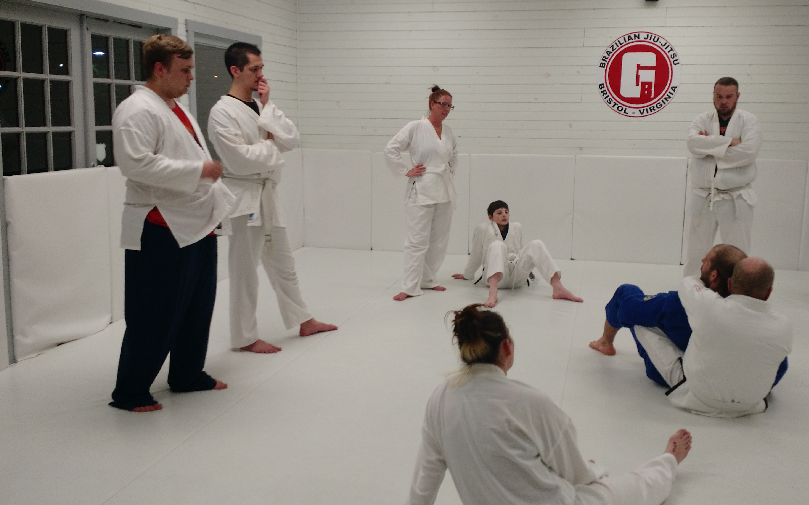 Todd Monin, MODG 2016, is a sophomore at his local community college, studying Criminology. Recently, Todd realized that he would need a type of physical training in his career as a police officer.

He discovered a local dojo that was offering Brazilian Jiu-Jitsu classes three times a week. The dojo offered one week of complimentary classes, and Todd really enjoyed his first experience and signed up the next week.

He began his classes in January and now, at the beginning of March, is showing marked improvement in his classes, though he is still a white belt. The end of every lesson concludes with a live drill play where the students grapple on the mat until time is called or an opponent taps out.

The different techniques and forms that Brazilian Jiu-Jitsu are adopted from Kodokan Judo and involve full-contact with the opponent instead of striking.

BJJ is most strongly differentiated from other martial arts by its greater emphasis on ground fighting. Commonly, striking-based styles spend almost no time on groundwork. Even other grappling martial arts tend to spend much more time on the standing phase.

BJJ promotes the concept that a smaller, weaker person can successfully defend themselves or another against a bigger, stronger, heavier assailant by using proper technique, leverage, and most notably, taking the fight to the ground, and then applying joint locks and chokeholds to defeat the opponent.

BJJ training can be used for sport grappling tournaments and in self-defense situations. Sparring (commonly referred to as “rolling” within the BJJ community) and live drilling play a major role in training, and a premium is placed on performance, especially in competition, in relation to progress and ascension through its ranking system.

I was able to attend the Jiu-Jitsu classes for one week, and the instructor said I did a great job for my first time ever doing Jiu-Jitsu. It is very easy to injure yourself if you do not listen to the instructor.

I managed to pull a Hamstring muscle during my second class and the instructor told me that my joint lock was at the wrong angle. My personal take on the Brazilian Jiu-Jitsu sport is that its takes a great deal of muscle memory, drills, and dedication.

Tessa: What did you do once you discovered it?

Todd: I took an interest in a panel the Dojo had set up at my college, but didn’t really inquire further. I was approached a few minutes later and I was handed a card, with their address on it. I decided to stop by and take the first week of class for free that they were offering.

Todd: I did not sign up immediately, but once I got my schedule in order I signed up for classes and started going three days a week.

Tessa: How long have you been taking classes?

Todd: I’ve been taking classes for about three months.

Tessa: What was your first impression?

Todd: My first impression was of watching people roll around, looked more like some form of wrestling, than a martial art that people traditionally think of when they hear ‘martial art.’

Tessa: What type of situations do you think you will need to use this material in?

Todd: I am studying to be a police officer. Brazilian Jiu-Jitsu would be in detaining suspects in order to cuff them, or in my private life, it could prove useful as a means of self-defense.

Tessa: Do you enjoy the classes?

Todd: I absolutely enjoy the classes.

Tessa: What is the worst injury you have received on the mat?

Todd: The worst injury I have received would have to be one on my neck. I was rolling with a particularly aggressive opponent and his struggling shifted my neck violently to one side. It didn’t come close to breaking, but it was hurting for a few days afterward.

Tessa: Is this martial art an experience that you would recommend to your friends?

Todd: It’s a pastime that I’d recommend to anyone, as a means of exercise, fun, and self-defense.

Tessa: Is there anything you do not enjoy about the martial art?

Todd: The only thing that I don’t enjoy is the sheer level of exhaustion that comes at the tend of practically every class. You will be left gasping for air on the mat, and may spend several minutes in the car, just to get your second wind.

Tessa:  What kind of advice would you give to a person who was just starting Brazilian Jiu-Jitsu?

Todd: I would recommend newcomers to constantly think about how to execute each technique, and make sure you’re always in a position on the mat where you can properly seewhat the instructor is doing, when he demonstrates the moves. Also, check out some YouTube videos of people in Jiu-Jitsu fights. Simply watching people practice Jiu-Jitsu can help you improve your own technique.