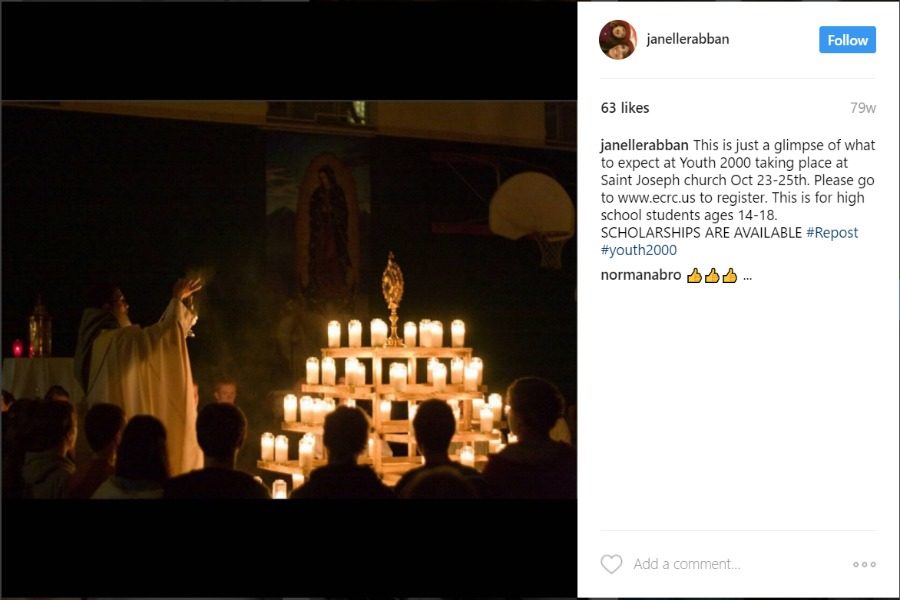 It was in the middle of April, 2012 when I first found myself packing my bags to attend a Youth 2000 retreat.  This three day retreat was directed towards all Catholic teenagers.  Each day we began with a Mass, followed by specific talks, meals, prayers and free time.  Each activity was extremely enjoyable.  However, there was one particular experience of the retreat, which stood out to me.

Towards the end of our second day, all the participants gathered together in a large room.  In the middle of this room stood a circular shelf and on it, many candles were placed and lit to resemble the burning bush.  We were then asked to kneel.  While doing so, one of the priests placed a monstrance on top of the burning bush with the Eucharist inside it.  During this time, my mind was filled with curiosity as earlier that day I had been told this experience would change my life.  I had also been warned multiple times I would cry.  About a minute later, one of the nuns began explaining what to expect.

We were told to make rows for the priest, so he could walk through while holding the monstrance.  We were also allowed to reach out and touch the cloth he used to hold it.  She then proceeded to tell us it was our time to pray and that many people’s hearts would be changed.  Furthermore, she said it was normal for people to cry and to let them be so they could have that moment with God.   The lights were then turned off.  As the candles flickered in the darkness, one of the bands began to play softly, “Lord, I come, I confess, bowing here I find my rest.”  After singing several lines, the same nun began to read from scripture.  Listening to the word, I could feel my heart and mind slowly being opened.  The readings continued for several minutes and it was only later that night when I realized just how much we needed them in order to be prepared for what happened next.

As the band played, another one of the priests reached out and took the monstrance.  I began to pray.  Already, the priest had started walking through the first rows holding the Eucharist.  As it got closer and closer, I knew I was about to let go of everything.  Finally, he reached me.  For the first time in my life as I touched the cloth, I knew I was facing Christ, my King and my God.  In that moment, the emotion I felt was overwhelming and I cried.  I not only felt all my shame and guilt for crucifying him, but afterwards I felt his merciful forgiveness.  Unless there, no one can truly understand what I felt.  My life was changed.

After I calmed down, I looked around the room and saw almost everyone in tears.  Everyone had been moved and it seemed like a miracle had just occurred.  I felt such joy.  Soon after, the whole experience came to an end and it was time for us to head back to our hotels.  I remember getting into bed and falling into a peaceful, much needed sleep.  Since then, I have never forgotten what happened that night.  Because of it, I find myself returning each year to this retreat so I might once again be reminded of my first, wonderful experience at Youth 2000.