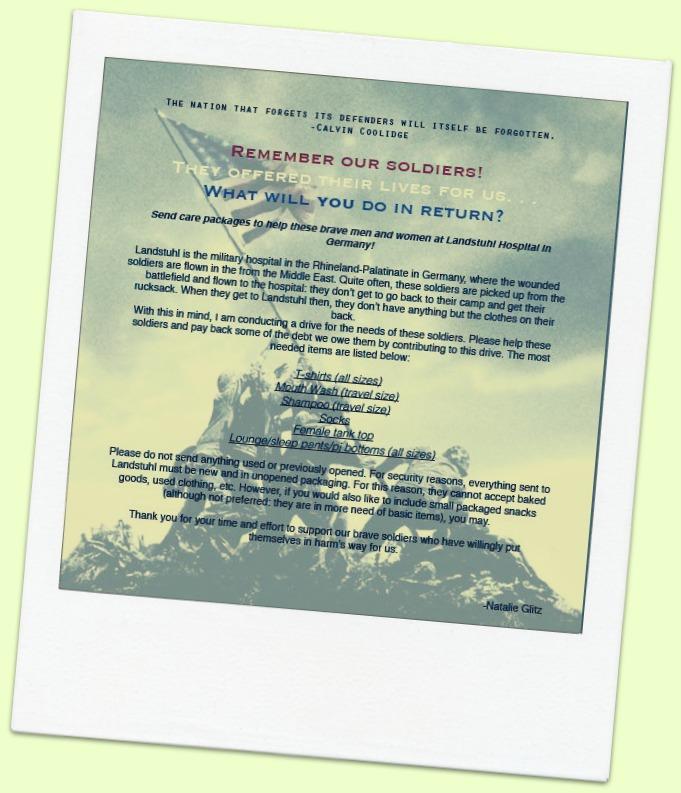 Natalie created this poster for her National Honor Society project.

This year marked the first for Mother of Divine Grace’s National Honor Society, Pope Leo XIII Chapter. The purpose of the organization, as laid out by its constitution, is “to create enthusiasm for scholarship, to stimulate a desire to render service, to promote leadership, and to develop character in the students of secondary schools”. Eleventh grade student Natalie Glitz is one of 141 members selected for her high grade average – a 3.85 is required-  and a recommendation from her consultant.

Each year the members of the NHS are in charge of coming up with and leading a project that will better their community or the school in some way. Natalie chose to organize a drive to collect care packages for wounded soldiers in hospitals abroad. The soldiers Glitz intends to send the packages to are ones in hospitals such as the Lundstahl Hospital in Germany where the injured men and women are flown in from the battlefield with nothing but the clothes on their back.
The young student said she took on this project “because so many people forget about these men and women who protect our country overseas.”
Her eyes have been opened up to the problem, Natalie said, because she comes from a military family herself and “everyone is so amazed and grateful that my various family members have chosen this life, but then when soldiers such as they are in need of simple necessities, such as clean socks, underwear and toothbrushes, no one seems to remember them”.

Natalie plans to spend fifteen to twenty hours on her project, collecting items, packing them up and shipping them to the soldiers in Germany. Talking about her contributions she says “my project will not even begin to cover all the needs of every soldier out there, but I know the soldiers that do receive even just a small bag of things will be so happy to just have some clean socks to wear and to brush their teeth, maybe even call home with a phone card.”