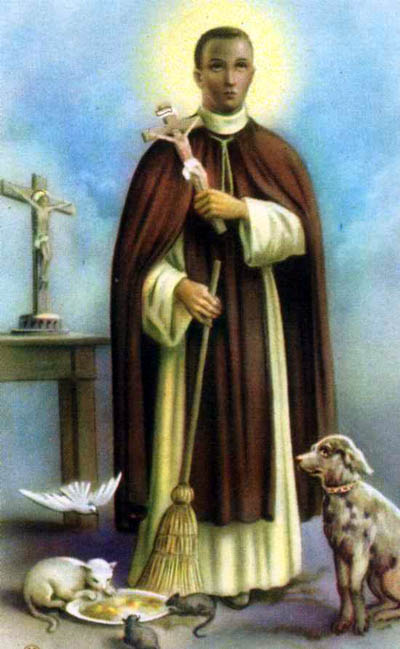 Martin was born on December 9, 1579 to a Spanish conquistador named Juan de Porres and a free black woman, Ana Velazques. Because of his black skin, he was rejected by his father and lived with his mother and younger sister in Lima. At age twelve however, Martin’s father began to pay for his education as a barber and he received ‘de Porres’ as his legal last name. As he grew up, Martin discerned a call to a consecrated life and joined The Dominican Monastery of the Holy Rosary in Lima.

It is during his time as a Dominican brother that the many and amazing stories of St. Martin de Porres begin. He started a hospital next to the monastery and it was said that he had the gift of bringing the dead to life. Martin was very humble though living without food for days, spending all his time, energy, and meager possessions with his patients.

Martin is also known for his love for animals. One story says that he convinced all the mice to leave the monastery pantries simply by asking. Another story tells about the time he persuaded a dog, cat, and mouse, normally enemies, to make peace and eat from the same bowl.

By the time Martin de Porres died on November 3, 1639, he was already widely recognized as a saint. He loved each person, be he black or white, as Christ did. This great love towards all living creatures is what makes St. Martin a great saint.