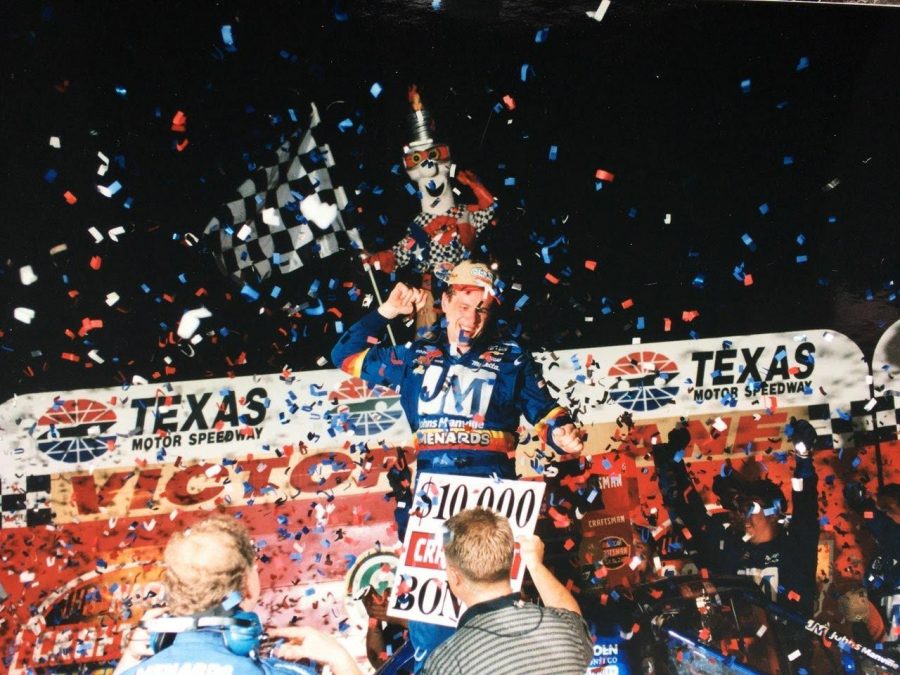 Another picture from his victory in TX

An Interview With a NASCAR Truck Driver
By Mallory Grosskreuz

Many of my close friends don’t know this about me, but I have an uncle, Bryan Reffner, who is a former NASCAR driver. He raced for NASCAR from 1996-2003. At the time, he was living in North Carolina with my aunt, which is the heartland of race car driving. After retiring, they then moved back to Wisconsin, where he drove for the American Speed Association series (ASA) for a couple years. Here is the interview with my uncle.

Uncle Bryan: I got involved in racing because my dad raced, and I grew up around it. I first started racing in a division called “hobby stock cars.”

Me: When was your first NASCAR race?

UB: My first NASCAR truck race was in 1996 at Homestead-Miami Speedway in Homestead, FL.

Me: How fast did you go?

UB: We raced at Daytona International Speedway, in which we reached speeds over 200mph.

Me: What was your typical day? Was it fairly rigorous?

UB: A day at the race track began early in the morning and was very busy. We started the day practicing on the track, trying to adjust the race car to go as fast as possible. Then we qualified, which set your starting position for the race. We attended driver’s meetings and autograph sessions. Then we would race in the evening.

Me: Did you travel a lot? If so, which state did you enjoy traveling to for races?

UB: We did travel a lot as each race was at a different race track across the country. North Carolina was my favorite as it was heavily rooted in racing.

Me: What was your most thrilling race of your career?

UB: My most thrilling race was when I won the NASCAR truck race at the Texas Motor Speedway.

Me: Did you ever crash during a race?

UB: I had a severe crash at Homestead-Miami Speedway and fractured several bones in my foot.

Me: What was it like to have people ask you for an autograph?

UB: It was pretty cool to have fans that watched you race and ask for your autograph.

Me: What do you think is an important skill or trait for any budding driver to have? What advice would you give to a young person who might be thinking of pursuing racing as a career?

UB: The best skill to have as a young driver is the ability to “feel” the race car. The term “feel” is knowing how fast you can go without losing control of the race car. The best advice I can give is to be dedicated to the sport. You have to learn not only what it takes to drive but also understand how a race car works, what adjustments to make to go faster.

Me: Who was your main support system throughout the course of your career?

UB: I had many people that supported and taught me things through my racing career. My dad, brother and friends were instrumental in helping with racing. Your Aunt Reyne was my personal support and taught me how to interact with people.

Me: How did my lovely aunt like being married to a celebrity?

UB: Your Aunt Reyne always told me how proud she was that I made it to NASCAR knowing how difficult it was, but she never really thought of me as a celebrity.

All in all, the interview was great and I learned things about my uncle’s career I never knew before. I was very young for much of his career but I have a lot of respect for him and his accomplishments.