I should listen to my own advice. 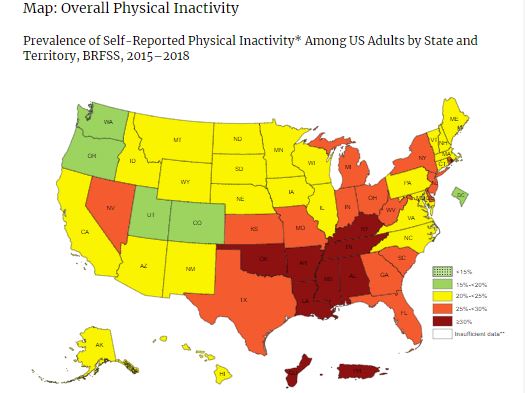 CDC map shows how active the population is in each state.

As a socially inept 16-year-old, going outside in the blazing sun isn’t really high on the things I want to do; however, it is still important that people go outside and get physical activity.

A study was conducted on how physically inactive different states are. This study measured race/ethnicity and location. To acquire all the data for this study, a survey was conducted by phone in which people would say their ethnicity and how much physical activity they did in their off time.

The results, on a surface, seem to show that 31.7% of Hispanics, 30.3% non-Hispanic blacks, and 23.4% whites are physically in-active. This study seems to say that Hispanics are the most in-active and whites are the most active; however, if one dives a little deeper, one sees that this is not the whole truth.

If we look at the physical inactivity by ethnicity, it seems that Hispanics are the most in-active demographic recorded, however\; this doesn’t mean that they are the most lazy demographic. According to the U.S bureau of labor, 69% of Hispanics have very physically taxing jobs.

Since most of their jobs have them physically exerting themselves, it would make sense that they would spend most of their free time relaxing inside. This same thought process can be applied to blacks and whites, with blacks also working outside more, and whites working at desk jobs more.
If you want a more detailed account of ethnic occupation, go to https://www.bls.gov

The map shows that most of the northwest is in yellow and green, except for Nevada which is in orange.

Moving over, the south is highlighted in red. with the surrounding states in orange.

The East coast is mostly yellow with a few orange states mixed in.

Now, at first glance, you might think that the south is the laziest region of the U.S. and the east and west coasts are the most active.

Having lived in the south all of my life, I can say that you do not want to be outside during the summer. The southern summers are hot, humid, and filled with mosquitoes and other blood suckers.

The coasts are filled with beaches, tourist traps, and amusement parks, perfect for summer fun.

Florida stands out because you might think, “Shouldn’t Florida be active with all of its beaches and such?”

This is puzzling until you know that Florida has a lot of elderly and retired people living there. It is also interesting to note that states with a lot of cities seem to be less active. This could be due to more skyscrapers and less natural beauty.

This study is very interesting and I encourage everyone to read it for yourself, but the point of it is that physical activity is important. Breaks you have in between work should be used taking walks, not playing on your computer.

I say this knowing full well that playing on my computer is exactly what I’m going to do after writing this piece, but hey, I digress. The whole point of my rambling is that you should enjoy the great outdoors while you still can.

Physical activities are infinitely better when you do them with people you love. So whether you’re six years old or sixty, have fun.