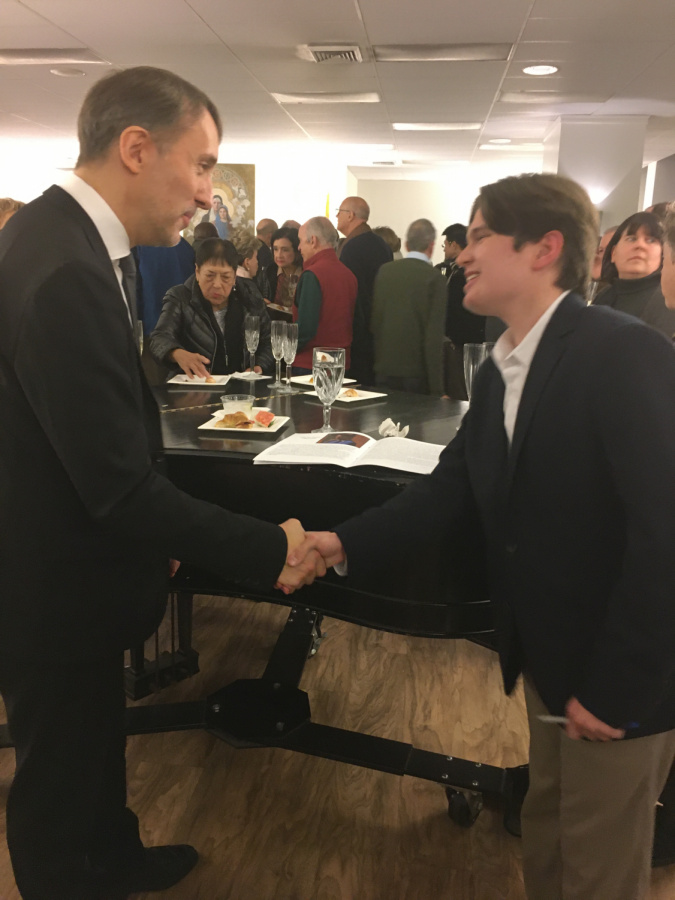 It was an afternoon that I will likely never forget for the rest of my life.

On Sunday, November 17th 2019, I had the honor and privilege of attending a recital given by Olivier Latry, titular organist of the Cathedrale de Notre-Dame in Paris, here in Washington DC.

As Monsieur Latry is one of the most world-renowned organists of the 21st-century, this was an event I had been looking forward to all year, and the experience of finally seeing him perform live is a memory I will never forget.

As I am a blossoming organist myself, Monsieur Latry has been one of the greatest inspirations to me. His talent is simply impeccable, and nobody can even come close to his ability, especially when it comes to improvisations.

With the cold November afternoon rolling in, my family and I set out to St. Ann’s Catholic Church in the northwest corner of Washington DC.

This was the venue where Monsieur Latry would be performing. He was to play the recently-restored Letourneau pipe organ, comprised of fifty-six stops and over four-thousand individual pipes.

The original intention for this concert was to celebrate the 150th anniversary of the parish of St. Ann, but due to the devastating fire that burned Notre-Dame’s years of history in April earlier in the year, the concert would also be used as a fundraiser to help the restoration of the 850-year-old cathedral and Parisian icon.

My family arrived at the church, took some programs, and found a seat. Rightfully so, the church was filled to the brim with people.

At the front of the church was a large projector screen, in which video of the organ console would be projected to give the audience a clear view of Latry playing.

In the audience happened to be the Ambassador of France Phillipe Ettienne, as well as his wife.

My heart was racing for the moment I would finally see Monsieur Latry start playing.

Soon, the moment came and he appeared. He began the program by starting off with a mixture of classical musicians, such as Johann Sebastian Bach and Alexandre Pierre Francois Boely, along with more recent French romantic composers such as Louis Vierne and Cesar Franck.

I was instantly captivated by his flawless playing, all with no sheet music in sight!

Halfway through the program, there was a brief intermission. This served as time for a collection to be made to help fund the restoration of Notre-Dame. The pastor of St. Ann’s Church spoke about how Notre-Dame continues to be an important pinnacle for both the Catholic Church as well as world history, and later he invited Latry up to speak.

Monsieur Latry gave details about what must be done in terms of restoration as well as the extent of the damage.

Due to the intensity of the fire, the spire of the cathedral collapsed and crashed through the roof, creating a gaping hole in the vaulted ceiling, and opening up the vulnerable 850-year-old structure to the harsh weather of France.

He detailed that the summer of 2019 was one of France’s hottest on record, and even though Notre-Dame may have withstood the heat this year, he was unsure as to how it would endure again next year.

The heat of the fire also destroyed many stained glass windows, opening up the building to the wind.

Latry also spoke about the unfortunate turmoil the fire has caused to the people employed to work at the cathedral, and how many have lost their jobs. In just a span of seven months, the workforce at Notre-Dame has been reduced from sixty-seven when the fire occurred, to just seven people.

Although, as an organist, he is not that affected as his primary source of income is continuing to tour around the world and give concerts to raise awareness and funds; he is eternally grateful for the generosity that has poured out, as many employees of Notre-Dame are relying on third-party donations just to be able to make it through the day.

After the collection was completed, Monsieur Latry went on to detail about the second half of the concert. This would be a contrast of pieces from more modern and avant-garde composers such as Marcel Dupre, Olivier Messiaen, and a piece from his former instructor, Gaston Litaize.

He also spoke about how the concert would end with an improvisation on “St. Anne’s Hymn”, which is the music that “O God Our Help in Ages Past” is set to. He wished everyone an enjoyable rest of the concert and, after receiving raucous applause, headed back to the organ loft.

He proceeded to flawlessly to bring many more different pieces to life entirely from memory. It all seemed so effortless as he exhibited so much mastery over the instrument.

Finally came the ending improvisation. He started out very soft and gradually started to build more and more, slowly bringing out the many flutes and reeds and becoming louder and louder.

It was very easy to be mesmerized as his hands dashed across the three manuals of the organ. Eventually, he reached where the hymn would ring out in full glory.

The rector of the church came to the pulpit and invited the entire congregation to join in a rousing chorus to accompany the music. The hymn finished and every stop was pulled to end the improvisation. The church was resounding in so much music, it was a feeling that made you think that God was truly there.

The final chords were blasted out and the music had finally come to an end, and I was certain that the organ was left gasping for air. Monsieur Latry swung himself off the bench to overlook the congregation.

Cheers, whistles, and tremendous clapping filled the whole church as he received a well-deserved standing ovation. He graciously bowed as the applause continued for many minutes.

The clapping slowly died down, and the rector invited the entire congregation to a reception in the church’s crypt. My family and I made our way down. There were small sandwiches and hors d’oeuvres available, as well as plenty of champagne.

I was hoping Monsieur Latry would stick around and that I would have the opportunity to meet him. As I am a rising organist, he is one of my greatest inspirations and I have the utmost respect for him; meeting him would simply be a moment in my life I will never forget.

Eventually I caught sight of him chatting with other people. A line was starting to grow as people were hoping to at least spend some moments with the master. My family and I squeezed in. I was extremely nervous as to what I would say, considering this was the ultimate moment that I had been hoping for.

The line grew shorter, and I eventually came face-to-face with the man himself. I was so apprehensive I was almost speechless\; never in my life did I think I would ever come this close.

We shook hands and exchanged words. I told him about my love of the organ and how he was one of my greatest inspirations, as I was and still am theoretically a novice.

We even exchanged a few words in French. He was greatly honored and humbled and he offered me invaluable encouragement for me on my musical adventure. I asked him if he would be back in the area anytime soon, and he said that he would be returning in February to Philadelphia, where he would be performing at the Performing Arts center there along with two other organists.

We posed for a picture together, and he graciously signed my program for the concert as well. I was leaping for joy on the inside as we shook hands again. I humbly thanked him, and my family and I eventually made our way out.

I was shaking as I had felt a level of happiness I hadn’t felt in a very long time. I was forever indebted to Monsieur Latry, and being in his presence brought me so much elation. He is truly a remarkable person bursting with talent as well as humility, the likes of which is rarely seen.

I truly do hope I get the chance to see him perform live again at some point. When? I do not know, but I am forever grateful.

Though it may have lasted only a few hours, these few hours will be something I will always remember for many years to come.