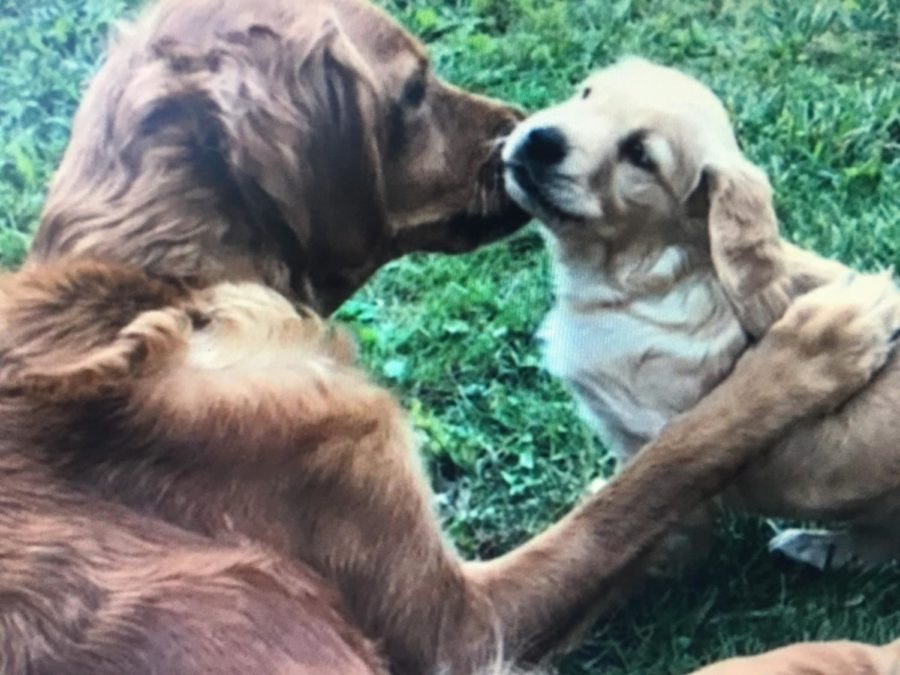 Puppies are certainly one of the most adorable wonders of nature! Who couldn’t love puppies?

Raising puppies is time consuming, and can certainly be exhausting, but it is very rewarding. Watching the little fur balls grow and develop their own characters is an incredible experience, which I would like to share with you in this article. As I write this in October from my home in Europe, the puppies are about six-weeks-old.

Already, 12 hours before the first puppy would arrive, the mother dog, Kira, went into labor.

In canines, labor can last as long as 24 hours (as in this case) or merely 3. At 8:22 am, a light colored female Linda Perita – Linnie for short – was born. She was followed by her sister Larissa (Lissie) about two hours later. At 1:02 pm Lancelot was born, the biggest male. His little brother Lanziano (also known as Hank or Nano) arrived only 20 minutes later. Four hours later Lassiegal (Lassie) was born. At 6:46 pm Lady Dusk was born, followed by the youngest: Lila Rose.

When puppies are born, they cannot see or hear and are thus completely helpless.

Because this was her first litter, and because she was exhausted, Kyra did not fulfill the duties of motherhood as faithfully as she should have. Often, she would step on a puppy, or lie on it, or she would get out of the large bed and leave them altogether.

This is why we had to spend many sleepless nights taking night shifts to watch the puppies. We had to make sure that the smallest (Hank) got enough to drink, as his older siblings would often push him away (typical large family mealtime dynamics).

On the August 29, when the puppies were just over a week old and starting to open their eyes, we weighed them for the first time.

It was around the 13th day that they opened their eyes. At this point, they were more mobile, and some were already trying to stand.

After four weeks, the weaning process began. At first, this included presenting them to food that tickled their fancy. We began by softening dog food in goats milk, which they enjoyed very much. They also liked mashed chicken with fennel tea.

Not long after the weaning process, they were de-wormed, and after that, they were allowed outside for the first time.

In our garden we built a large pen for them where they could run around and get plenty of exercise.

We have observed an interesting thing. Now that the puppies are six and half weeks old. The mother dog is helping the weaning process by throwing up her breakfast to feed them.

At seven weeks, they will be micro-chipped and vaccinated. Micro-chipping is practically obligatory now. A chip the size of a rice corn is injected under the skin on the left side of the neck. The microchip will have all the records of the dog saved on it.

At eight weeks the puppies will be able to go to their new homes. I will find it very difficult to part with them. I am glad that we are keeping at least one, and maybe two!